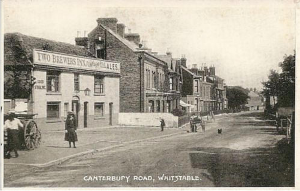 Welcome to the oldest surviving public house in Whitstable The Two Brewers was once two farm cottages dating back to about 1500. They stood alone, surrounded by fields and farmland on a track leading from London and Dover to the small village of Whitstable and its trading  harbour.

In 1690, they were sold along with the land for £25 to a Mr Thomas Potts who turned them into a Coaching Inn with stables

Heavy horses were stabled here, and merchants leaving the harbour laden to the limit, would pay a fee to unhitch their horses and have their goods hauled up the steep Borstal Hill by them.

In 1731 the Inn was leased by Thomas Tribe, a brewer in St Dunstans, Canterbury and later to a John Curtis who was another local brewer. In 1785 it was sold to John Abbott of Thanet, and was bought in 1825 by Rest Flint, later Flint & Co

It was a time of piracy, smuggling and looting. If only walls could talk, there would be a tale or two to tell from this Inn!